Now reading: Inspiration India - Delhi
Share
PrevNext
I am finally back from India and over my jet lag enough to write in a coherent way.  Overall it was an amazing trip full of inspiration - how could you not be inspired by India?  It is a colorful country with an array of sights, sounds, and smells that stirs the senses.
I arrived in Delhi at about 8:30 pm on June 23 and was immediately smacked in the face by a thick wall of heat.  It actually felt really good because the plane ride over was so cold!  My parents were on a different flight, and they arrived at about 3am.  Needless to say, because of the heat, traveling, and time difference, none of us slept very well the first night.
My first day in India, I woke up to discover that we were in the middle of a heat wave.  Indian heat waves are in no way comparable to any kind of heat you can experience in the US - the highs were about 115 degrees fahrenheit, but the humidity is what could really do you in.  So we tried to stay in as much air conditioning as possible, and filled up on fresh lime sodas, one of my favorite things to drink in India.  What they do is mix fresh lime juice with club soda, and add in a little sugar or salt (or both).  It’s so refreshing and a perfect antidote to the heat.
That afternoon, we met up with a women I work with, and she took us to an amazing trim store, filled to the ceilings with metallic threads, dip-dyed raffias, rhinestones, chains, grosgrain ribbons, embroidered appliques, etc, etc.  I was like a kid in a candy store.  Knowing how long I can spend digging in a place like that, I tried to cut the time short, so my parents wouldn’t kill me.  I think I ended up spending about 2 hours inside, but I was sure to go back a few days later to have one last look.  Here are some of the cool things I bought: 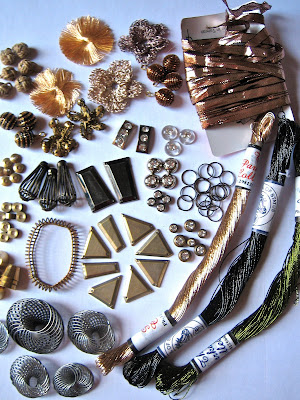 Later that week we went to the chain market in Old Delhi.  This is the oldest part of the city where a lot of amazing markets are.  It seems like there is a market for everything - spices, chains, beads, textiles, books, stationery, bangles, paper, etc.  All the streets are very narrow and winding, with electrical wires draped across the tops of the alleyways, and wandering goats and cows mixed in with pedestrian, bicycle, motorbike, and rickshaw traffic.  It’s like a labyrinth, jam-packed with people and products, in which you could easily get lost.  I think it’s best to go with someone who is familiar with whichever market you want to go to, as there are lots of pic-pockets in the area, or as our taxi driver described to us, “walking man cheater.” 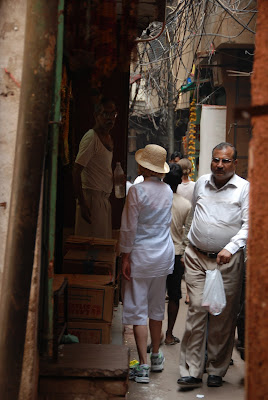 a view of the skinny alleyways 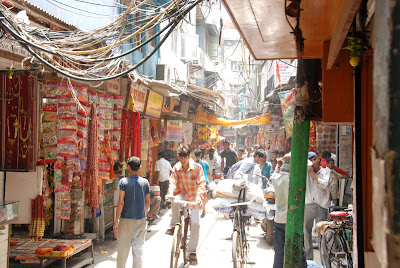 one of the main streets in the bead market 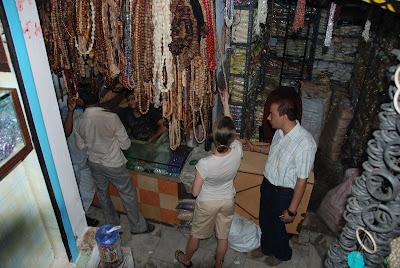 looking at beads in the bead market - this is one of at least 400 such stalls
I love this kind of market, as it evokes a sense of adventure mixed with danger.  When we were on the outskirts, my mother said, “it looks like what I imagine hell to look like.”  It took some persuading to get her to go in, but once we did, I felt like we were in one of those markets in an Indiana Jones movie - so many things to see, so much excitement, and treasures waiting to be discovered!!  My dad took great pictures of some of the people on the streets there: 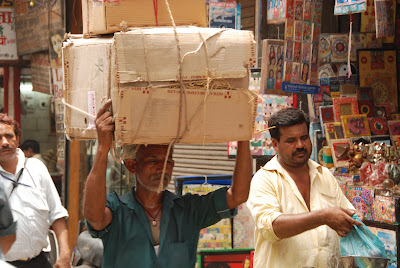 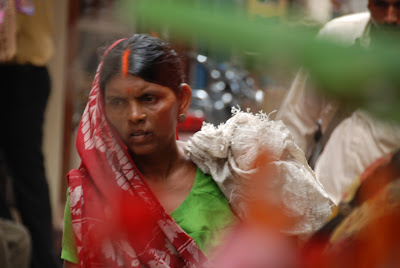 women sometimes apply paint to the part in their hair 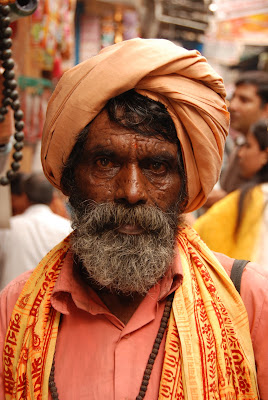 this man is a sort of vagabond, who has renounced all material possessions and wanders from place to place, depending on handouts.  It’s similar to but not the same as homeless people you encounter in the US
We ate some amazing food while we were there.  The woman I work with in Delhi and her husband took us to the Delhi Golf Club one night for dinner and drinks.  It was crazy to think that people could be playing golf in that heat, but apparently they do.  Luckily, we had some fans to cool us off, and the food and company was great.
Another night we ate at a restaurant called Lodi Gardens, which was to die for, and of course I filled up on curry and naan.  The garlic butter naan was addictive - I don’t think I’ve eaten so much bread in my life, outside of France.
On our last day in Delhi, we went to the Tibetan Bazaar, a strip outside of Connaught Place where they sell many Tibetan handicrafts.  There is a road around the corner called the Janpath where many Rajasthani women sell beautifully embroidered textiles and sarees.  They are hard bargainers, though, so you have to come prepared to do battle and counteroffer half of what they name as their first price. 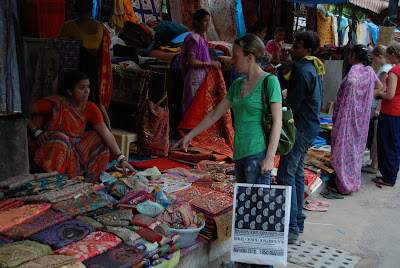 look at the amazing colors!! I love it!
From Delhi, we went on to Jaipur, which was even more inspiring!  I’ll write all about it in my next post.