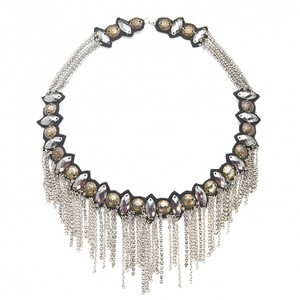 Yesterday while donning my Constanople necklace and working in Starbucks I was approached by a seven-year-old girl named Molly. Very casually she walked over, where I was furiously typing with furrowed brow I’m sure, touched my necklace and very politely asked, “can this be mine?” Needless to say I was slightly taken aback. Often times I get so caught up in my work I lose all sense of surroundings and become completely unaware of what’s going on around me- which is great when dealing with the task at hand, but when you think about it quite scary. Luckily, Molly wasn’t much of a threat- aside from potentially spilling my venti iced coffee all over my Mac- but for the most part the whole experience was quite sweet. Her mother ran over as soon as she noticed the interruption and apologized profusely. I told her it was fine and quite a relief the interruption was initiated in the name of fashion and not the normal “hey, can I get your number.” (Guys always blow my mind when attempting to pick me up! I mean seriously, do you not see me and my furrowed brow working here?)

After the quick laugh the three of us got to talking, and that’s when the barrage of questions hit me from this little person with a slight lisp. (Has anyone ever heard a child pronounce the word fashion?! “Fathion”, it’s actually quite adorable!) After fully answering all of her questions- which was weird because often times I find myself speaking like a cast mate off of Dawson’s Creek (for all those not understanding the reference, I mean the verbiage I use is at times extensive, almost as though I sport a pocket thesaurus with me at all times. But what can I say, I like big words!). So here I am, nerding it in Starbucks- specs on, hair in a messy bun, pen in my mouth, notebook to the left, Mac to the right and coffee front and center- sitting with this adorable little girl propped on her mother’s lap as we sipped java (Molly of course was drinking milk from a sippy cup) and talked all things fashion.

It was absolutely fascinating to hear Lisa (a mother from Long Island who annually subscribes to Vogue and Parade Magazine) and Molly’s (for Christmas she asked Santa for a subscription to Teen Vogue) perspective on the industry. Lisa was actually a bit fearful of fashion and as a fellow suburban native I get it! Often times women (Lisa included) subscribe to Vogue as more of a female protocol than view it as an insightful resource. Listen up ladies (young, old, mothers or not), this is absolute rubbish… Why conform to such standards in the name of femininity?! Would you go to a party if the people attending you didn’t like, nor had anything in common with? Or would you don a shade of lipstick that didn’t suit your skin tone? Or purchase a pair of pants that didn’t fit? (Actually, ignore that last question- sometimes I also find myself squeezing into a pair of jeans with the notion of “if I just jog an extra ten minutes for an additional ten days they’ll fit perfectly.” But in reality do you know what happens once I do this?! I hate myself for it, boycott jogging entirely- instead opting for desert after dinner- and give them to my sixteen year old sister who has the legs and rear end I wish my twenty eight year old self still had.)

But, referring back to my earlier questions- you would probably answer no. Which if you did, then by conforming to this homage of all things feminine just for the sake of being a female isn’t very smart. You need to find things that suit you, things you want to be a part of or wear; things that make you feel better about yourself, not worse. So what’s the point in subscribing to or wearing things that don’t? It just sounds silly to me!

So ladies, DON’T EVER CONFORM- this is why women before us fought in our honor, so in today’s world we could make decisions for ourselves that best individually suit the people we are. We have one shot at life, so wear what you want and be who you are; I did and will always continue to do so!

And as the great Kelly Cutrone would say: “Normal gets you nowhere!”

Style Spotlight: Valentino Ok, so if you haven’t seen ‘Valentino:...

Fashion Scene: Madame Gres Genius! Renowned for being the last of...