Taken from the point of view of a Dostoevsky novel, St Petersburg is dark and dramatic, with an undertone of romantic melancholy.  As in Tolstoy’s “Anna Karenina,” the characters live in a society obsessed with hierarchy and status, and seemed doomed to a life of restrictions.  Like the Victorians in England, everything has an almost Gothic feel.

But the Russian melancholy is fully embraced and exalted so that if one loses it, one also risks losing one’s identity.  Many a tortured artistic genius has been nurtured in this environment of dark winter days, strict social hierarchy, and the ennui of life.  Just take for example Balanchine, Chagall, Dostoevsky, Erte, Tchaikovsky, Pushkin, Anna Pavlova, and Anna Akhmatova, as a few of many.  They all created something beautiful from the harsh conditions in which they lived.

Like Anna Karenina, who feels thoroughly repressed and trapped in the society in which she lives, I designed the St Petersburg necklace to be a reflection of that.  The jewels are covered in layers of tulle, so that their sparkle and sheen becomes muted; thick cording runs back and forth, encasing tiny gems as if holding them prisoner.  The necklace, like a character in a Russian novel, revels in and surrenders to its melancholy, until it takes on a life of its own, and ultimately transforms into something beautiful. 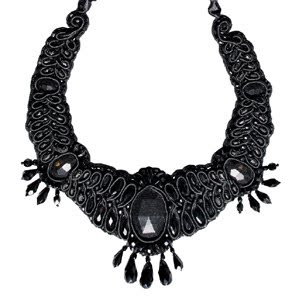 The burden of being alive is part of the human condition, which we all can relate to on some level, and through all of the pain of living, doesn’t some beauty inevitably evolve?